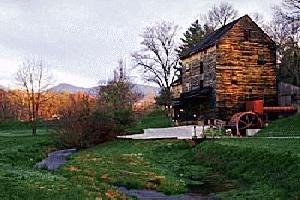 From The Woodson's Mill Home Page:

In the shadow of Mount Pleasant, seen in the background, is Woodson's Mill, located near Lowesville, Virginia in Nelson County, is a working water powered grist mill that dates back to the late 1700's. It was operated for many years by Dr. Julian Belmont Woodson, a medical doctor and five term State Senator representing Amherst and Nelson Counties. It became known as "Woodson's Mill" and the name was retained by its current owner and operator, J. Gill Brockenbrough, Jr. He purchased the mill in 1983 and restored it to its current state. 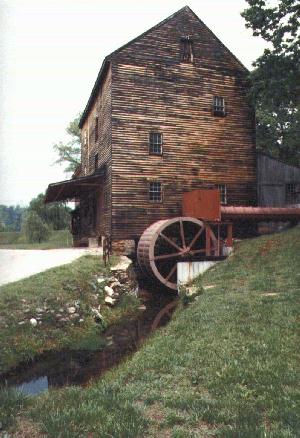 Description: A unique 18 minute video of an old, still operating grist mill in rural Virginia. This mill, started in the 1700s, and is still in daily operation and producing stone ground flours. The owner and the miller guides you through the entire process from water power to the huge millstones via massive gearing to the final product. 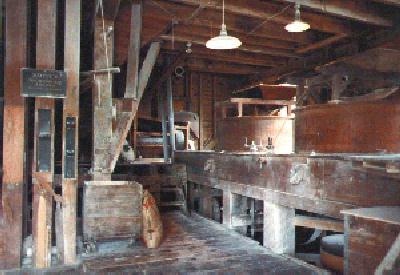 The video presents how a single individual can restore a old mill. In the "before" photos the mill, it looked a bit too far gone, and most people would have left it to fall completely to the ground.   The video shows the stages of the restoration, from the water wheel and the building are shown in a few brief seconds the time. It is evident that they took care to rebuild the mill and the water wheel the way it was originally.  The new owner was not interested in converting the mill into a home so he could sit there and purely watch the water wheel turn.  They made the mill operate once again. The mill was once again made to do what it was originally intended to do, grind flour and meal products.

I receive a great many letters and emails from people who would like to restore a mill and perhaps just don't have the money it would take, but very few are willing to take the next step to make the mill actually produce a product.  What is nice about the video is the fact that there is no real commercial product endorsement.  It is a given, that Woodson's Mill sells the flour and meal that produce but it never placed in front of the camera.

This is what makes the educational value of the video much more important than just a tool for selling more cloth bags of Woodson's products.  They talk and show in the video the "how," and the "why" of making stone ground flour and meal. It is just because of the love of for what they do which is operating an old mill and make flour the old fashioned way.

There are a number of mills around the country selling organically stone ground flour and meal that make a six figure profit each year.  You get the feeling that they love what so much that they do so much that is not important that anyone would ever see the mill operate and they would happy enough just to take a bag of meal home for their own use.  The folks at the Woodson's Mill are like many rural Virginians who would rather take that extra step to ensure the quality of the mill products that they took home to their families. This kept many rural mills in Virginia operating well into the twentieth century and hopefully will for a long time into this century.

It is a very uplifting film. 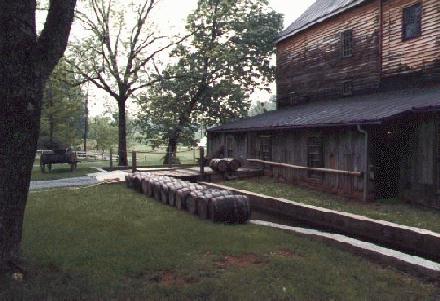 The most photographed mill in the United States is Mabry Mill along the Blue Ridge Parkway near Meadows of Dan, Virginia.  The saw mill portion was constructed in 1910, the woodworking shop built in 1914, and the center grist mill section built in 1928.  The second most photographed mill in the United States is the Glade Creek Mill in Babcock State Park, near Clifftop, West Virginia. This mill was constructed as a commemorative mill from cannibalized parts of three grist mills for the American Bicentennial in 1976.  The next on the list is the grist mill at the Wayside Inn that was built by the Fitz Water Wheel Company in 1926 with money from Henry Ford and his friends.  I know people who have worked on that mill.  I know Donald C. Wisensale who worked for the Fitz Water Wheel Company and John B. Campbell who worked for both himself and Fitz. My grandfather was a millwright. These three (above mentioned) mills were built within my fathers and my own lifetime.  So what does that tell you? Perhaps we have short memories when it comes to things old or what is really should be termed nostalgic?

The speeds that wind and water mills grind grain is perfectly fine, and at one time there were literally hundreds of mills not just in some states but on the county levels.  The problem was that instead of thousands of mills supplying flour and meal products on a local level just a handful of mills wanted to supply the demands for the whole country and much of the world. And you can't do that by grinding grains the old fashioned way.  Water power was the main means that powered industries up until the 1890's. In 1790 there were some 7,500 small mills in the United States. In 1825 Maine, New Hampshire, Vermont, and New York had about 16,000 mills. By 1850 some 60,000 mills existed, scattered all across the country. Most of these mills were grist and sawmills, operating seasonally as demand and water were available.  In Lancaster County, Pennsylvania alone in 1900 there were 350 flour mills operating flour mills not to mention all of the other types of mills there were.  In the twentieth century the demand for personal consumption of flour declined and the larger merchant milling operations over took the local markets. After the second world war the country mills gradually became a thing of the past.

Woodson's Mill was built at the beginning of the American Industrial Revolution.  Oliver Evans with his improvements (as he like to call his inventions) for his automated flour milling system were developed in 1782-3, patented in 1787, and he published his classic book that became the millwright's and miller's bible, "The Young Mill-Wright and Miller's Guide."  That was published in 15 editions beginning in 1795 to 1860. Woodson's Mill that was built in 1794 and has seen it all.  It may have produced flour for various American war efforts and survived the American Civil War. The mill continued to operate and was modernized with improvements at the turn of the twentieth century with the installation of the Fitz Water Wheel and power train.  When the mill was restored by the present owner they took the trouble, time, effort and money to restore the water power system of the mill rather than using simply an electric motor.  The only thing the mill owner did not mention is that when the water turns the wheel, oxygen is mixed to the water that actually improves the water for aquatic life.

So this is a win-win situation for everyone and everything. Mills and water power are still a practical and environmentally friendly alternative technology.